Don’t leave money on the table! Work Smart Salary Negotiation shows you how to successfully advocate for yourself — and help close the pay gap for women everywhere. Women’s Weekend in Baton Rouge starts in a few days and AAUW BR is introducing Work Smart training. It’s a FREE session, September 25 at 9:30am: https://wcgbr.org/ww/dontleavemoneyonthetable/

We thank Michelle Erenberg from LIFT for her discussion on the proposed state constitutional amendment 1 that was on the ballot on November 3. We learned a lot of the ramifications of this amendment. (It passed, by the way.) 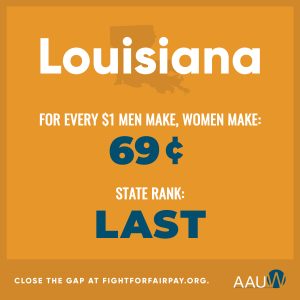 Postponed to September 2 due to Hurricane Laura:  We celebrated Toast to Tenacity — a 90-minute virtual event hosted by AAUW of Louisiana and The Society, Inc./Avant Garde Branch and moderated by Maxine Crump, Executive Director of the Dialogue On Race. Highlights of the program include a welcome by AAUW Louisiana State President Rhonda Kim Gleason and Director Aileen Hendricks who introduced LAVOW Theatre Company and a short version  of the video “Feminists Celebrate Suffragists: 100 Years of Voting” that was shown during the event. At 7 pm, we joined in the national “Toast to Tenacity” honoring the centennial of the passage of the 19th Amendment, which gave women the right to vote. All participants were encouraged to join in with a glass of grape juice or their favorite beverage. After the toast, Ms. Crump lead a discussion and Q&A about the significance of race in the suffragist movement and ways of working across racial identities today.

Watch: Louisiana Voices of Women Theatre Company will post their new film, “Feminists Celebrate Suffragists: 100 Years of Voting” online, so viewers can enjoy local Baton Rouge actors portraying women who played significant roles in the American suffrage movement and the subsequent fight for Civil Rights. Produced by Dr. Aileen Hendricks, Southern University, Baton Rouge and LAVOW, the film will be accessible on the LAVOW webpage, and an excerpt will be highlighted at the AAUW of Louisiana “Toast to Tenacity” event.

Still available:  Louisiana’s Old State Capitol will highlight the suffrage movement in Louisiana – safely – through social media platforms in exhibit. The Old State Capitol is where women first faced their representatives to fight for equal voting rights. They were turned down time and again. Even white women who fought for suffrage ended up urging others to vote against it, when they realized it would allow black women equal voting rights. Follow this unique story and see how tenacity and courage overcame fear and prejudice, leading to the passage of the 19th Amendment.

To commemorate the 100th anniversary of the 19th Amendment and women’s constitutional right to vote, buildings and landmarks across the country will light up in purple and gold on August 26 as part of the nationwide Forward Into Light Campaign, named in honor of the historic suffrage slogan, “Forward through the Darkness, Forward into Light.” Celebrate this milestone of American democracy in the official suffrage colors — from state capitols to skyscrapers to bridges to city halls! Learn more at https://www.womensvote100.org/suffragemonth. 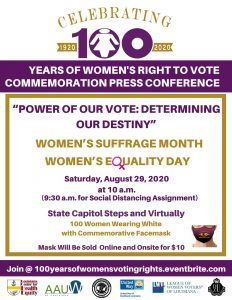 100 Years of Women’s Right to Vote 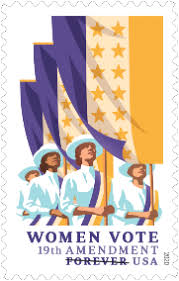 The 19th Amendment was ratified by Tennessee on August 18, 1920 and it was enough to establish a woman’s right to vote in the US Constitution. Celebrate locally with several activities in August around Baton Rouge and online.

Another source of info: https://www.2020centennial.org/. 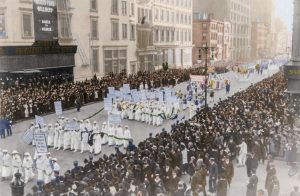 AAUW actively supports voting rights. In order to vote safely this year, Vote-By-Mail efforts are underway across Louisiana. You can find information about voting at Geauxvote.com.

Presently it is already in the law that senior citizens, 65 years and older, can request mail-in ballots. AAUW Baton Rouge made a tutorial for how to sign up for a paper ballot for the next and all subsequent elections. Click here for a step-by-step tutorial.

We Stand United Against Racism

AAUW joins the nation in mourning the losses of George Floyd, Ahmaud Arbery, Breonna Taylor and countless other people of color who have been unjustly killed across our nation. Our country needs healing. But healing will only come with justice. Read the statement from AAUW CEO Kimberly Churches: https://www.aauw.org/resources/news/media/press-releases/aauw-stands-against-racism/

This year’s Planning Meeting was held differently than in the past. We met on-line in a Zoom meeting on Sunday, June 4 from 2-4pm.

Zoom is free to use. You can download  the app for a computer or smart phone. To join with video and sound on a computer, you’ll need a camera and microphone. Smart phones and most laptops have both built in. You can also join with audio only from a computer. Or you  can call one of the phone numbers in the meeting invite to join by audio only.

However you can, please plan on joining the Zoom Planning Meeting. The more input we have from our members, the better our branch will be able to move forward during these difficult times. 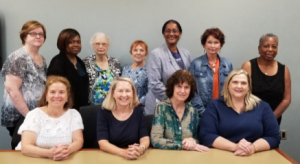 We met in April 25, 2020 via Zoom for the Annual Branch Meeting and award scholarships. Since it was a virtual meeting, scholarship recipients were sent checks with plans to meet once it is safe again.

The membership voted on the new officer slate and approved the budget.

AAUW sponsored an event during  Women’s Week in 2015 that is very important to our city and region.

A. Hays Town Sr. explained in his discussion “Saving our Water”, about the pending crisis with the drinking water supply of Baton Rouge and many surrounding areas. In case you missed it, click the links below for some details.  (The files were split for space reasons only.)

The AAUW Baton Rouge Louisiana branch is part of the national organization of AAUW (formerly known as the American Association of University Women). AAUW advances equity for women and girls through advocacy, education, philanthropy and research. Founded in 1881 by seventeen alumnae of eight colleges, AAUW is the largest, oldest national organization dedicated to the advancement of women and education. For more than 128 years, AAUW members have examined and taken positions on the fundamental issues of the day — educational, social, economic and political. Our commitment to our mission is reflected in all aspects of our work.